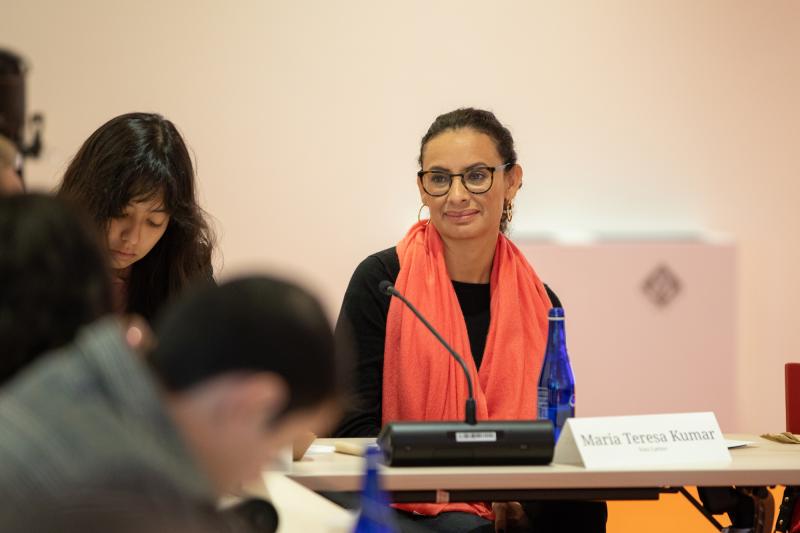 Columbia World Projects’ (CWP) research and engagement work on democratic renewal explores what sustains and ails liberal democracies around the world and how to revitalize democratic institutions that appear fragile and fraying.

By developing a comparative understanding of the trends and factors that sustain the institutions that undergird democracies, our work identifies new choices that encourage effective problem-solving and civic participation. We work in partnership with government, civic organizations, nonprofits and academic researchers in order to produce reports and develop communities of practice that advocate for and, in some cases, implement recommendations that emerge from our work. To that end, we organize working groups and initiatives (clusters of several working groups focused on a single theme). These groups meet regularly and bring together researchers, policymakers and practitioners to address pressing issues facing liberal democracies. On occasion, we organize standalone working groups to explore issues of immediate concern. Details on work underway, and plans for future activity, are below.

This initiative – which gathers law faculty, political scientists, leaders from grassroots organizations and election officials – focuses on democracy in the United States, and analyzes current barriers to voting, what constitutes a healthy electoral system and how to broadly adopt good practices in service of designing a bipartisan, independent election architecture that increases voter participation and safeguards election integrity. An initial working group within this initiative seeks to assess the high variation of local practices and standards in order to identify fragilities and understand why the election system was able to withstand withering assault by elected officials who possessed enormous power and influence. The group seeks to understand what legislative, infrastructure, training and personnel moves made that possible. The initiative builds upon previous CWP explorations of grassroots voter mobilization efforts and was launched in November 2019, with a convening on models and approaches that could improve voter access and impel mobilization to foster effective change.

This initiative, launched in December 2019, brings together political scientists, historians, legal scholars and political sociologists in working groups, each examining particular features of the party system, which  aim to map what ails political parties and offer concrete ideas for overcoming this failure of contemporary politics.

No successful democracy can thrive without a vibrant, legitimate and effective party system. Successful political parties usually attract support from broad coalitions. Such backing helps parties in office govern effectively by addressing both fundamental long-term challenges and more immediate issues voters view as urgent priorities. Increasingly, parties can be seen to have fallen short both in building sufficiently broad coalitions and in addressing the big questions of the day. These circumstances have produced two distinct trajectories: in some countries, notably including the United States, an ever-deeper and more narrow partisanship; in others, once-dominant parties come to resemble each other more and more, opening the field to formerly peripheral and intensely populist alternatives. Each condition brings with it vexing challenges to policy formulation that require descriptive explanation and solution-minded thinking.

This working group brings together researchers and journalists to explore federalism in the world’s largest democracy. Cooperation between India’s states and its federal government will be crucial to mounting an effective response to rising challenges to Indian democratic institutions, and to addressing core concerns about the country’s governance. This working group seeks to identify and propose to policymakers and legislators means of strengthening institutional mechanisms and platforms for resolving disputes between state and federal government while also exploring the stakes of these disputes.

The group’s launch meeting was in December 2020 and built on a previous meeting in October 2019, which considered the fate of India’s constitutional democracy.

Strategic Foresight and Collaboration Between the U.S. and Europe

This initiative emerged from a joint commitment by Klaus Welle, Secretary General of the European Parliament, and Columbia University President Lee C. Bollinger to deepen ties between Columbia University and the European Union, and seeks to assess how these challenges are shaping the agenda for policymakers on both sides of the Atlantic over the coming decade.

An initial meeting was held in February 2019. A second meeting, held in January 2021, brought Columbia faculty together with senior EU officials to explore pathways to a sustainable recovery from the current pandemic, with a focus on public health, democratic renewal, climate change and economic inequality. Future gatherings will explore transatlantic priorities, such as digital platform governance and how to protect both individual data and the integrity of elections.

In addition to our working groups, CWP hosts public events that tie into our work on democratic renewal. These have included an event featuring Tiana Epps-Johnson, Kate Gage, and Amber McReynolds with Hollie Russon Gilman on repairing our voting infrastructure ahead of the 2020 U.S. election; a conversation with María Teresa Kumar and Nsé Ufot with Olatunde Johnson on democracy in the time of pandemic and protest; a discussion with Wally Adeyemo and Glenn Hubbard on higher education, the economy and COVID-19; a lecture with Secretary Jack Lew and Raghuram Rajan on politics and public institutions; and the inaugural Campbell Leadership Lecture with Eric Schmidt.